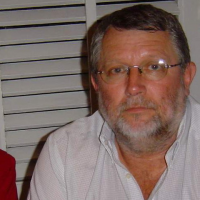 Self Drive, self catering camping Safaris mainly into South Africa\'s wilderness areas and game reserves, the Kalahari, Botswana, parts of Zimbabwe and Namibia.

Whatever Safari areas you wish to visit, I will design an appropriate Safari for you, lasting from 6 to 21 days or longer if you wish! Most of these Safaris however need to be planned 4 to 6 months in advance specially for the months of June, July, August and September when it is Africa\'s busy season with tourists from the Northern Hemisphere.

I am a qualified South African 4x4 Offroad and Adventure Overland (National) Tourist Guide. I am also a qualified Kingdom of Swaziland Tourist guide.

I started doing offroad tours in 1996, initially only with family and friends. I later joined an Offroad Club and did some tour leading there as well as assisting tour leaders. In total I have done more than 60 tours and safaris, either as a normal participant, assistant Guide or as the Lead Guide.

In 2014 I started SIMBA 4x4 TOURS AND SAFARIS. You tell me what you want and where you want to go and I will design a safari for you. The safaris on my website are there to give you ideas.

I do safaris all the way up to the equator, visiting and leading safaris as far afield as Swaziland, Lesotho, Malawi, Zambia, Tanzania, Botswana, Zimbabwe, Namibia and Angola. I have been to Mozambique in the past, but I prefer not to go there anymore because of the harassment being meted out to South Africans tourists and other foreigners of late.

If you do not have a 4x4, I will arrange a fully equipped hired 4x4 (single cab or double cab) for you at preferential rates. These vehicles come with rooftop tents, so it is not only your transport, it is also your accommodation.

If you are not proficient with, or have never driven a 4x4 vehicle in thick sand, in low range or in difficult conditions, do not despair. As we go along, I will stop and explain to you what to do when we encounter these obstacles. It will be kind of like a training session on the road!