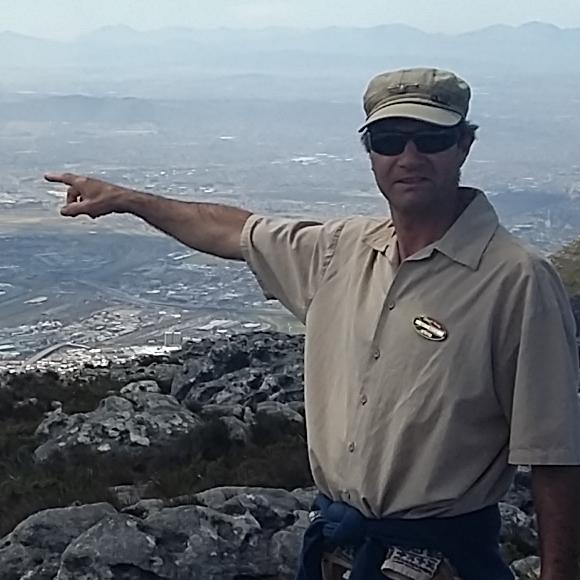 Cape Town, South Africa
English (native), German,
55
since 2010
Good Hope Adventures for the best fun, a stress free and unforgettable experience. We tailor make your outing to suit your pocket and interests. Our tours are exclusive and we strive to give the best professional service. We are well known for special interest excursions which include Dutch & Victorian Tunnel Tours, Historic Shoreline Walks, Historic City Tours, Bicycle Tours, Water Tours, Waterfront Tours, Snorkeling and Kayaking, WW2 Radar Stations, Maritime Historic Tours, 4X4 and Dune Safaris, easy Bicycle Tours, Wine Tours and Table Mountain Hiking Trails, River & Waterfall Tours, Dutch Garden Tours. We cater for the individual and small groups for flexibility of itinerary and to minimize the impact on often fragile environments.
Cape Town is world famous for the majestic beauty of Table Mountain which seems to embrace the City in rocky arms and seeing tourists and residents alike walking around her streets looking up at the spectacular sight is a common occurrence.
Let well known is that there is another, mostly overlooked, but fascinating realm to explore in Cape Town right under her centuries old streets. Full Circle was privileged to be shown some of these tunnels by Matt Weisse of Good Hope Adventures and what an enlightening adventure it proved to be!
If anyone loves Cape Town and/or its history whether you’re a resident of or visitor to the City a few hours with Matt in Cape Town’s tunnels will reveal the City to you in a whole new light and I’m not just speaking about the headlamp you must bring along with you.
Matt provides a truly amazing historical look at Cape Town unlike any person or tour I have ever listened to or been on. He is passionate, incredibly well-researched and informed and is a veritable walking encyclopedia on the history of Cape Town as a City. The Tunnel Tour is worth it simple to listen to Matt! His talk will leave Capetonians proud and horrified at the same time.
The next time you drive into town along Strand Street passed the Castle, look to your left at the Castle wall and think about the fact that ships used to moor where you are driving and your car would be under water.
There is not enough space to go into the history of the City’s tunnels here but they basically began as canals built in various stages as the City’s waste water system that used to flush into Table Bay. When, like most larger European cities at the time, the canals became overwhelmed by the bourgeoning population there were epidemic outbreaks and the City’s leaders acted quite quickly and chose to cover up the canals. Over time the waste water system was updated and improved until now most of these old water canals lie unused beneath the City, although Mountain and spring water does still flow through them into the sea.
Surprisingly, the tunnels are remarkably ‘clean’ and you are unlikely to see a single sewer rat although there is a faint ‘musty’ smell in some places. You are more likely to see groups of cockroaches which are unexpectedly inactive and just seem to collect in family groups. Most are the normal colour but the odd one may be white.
Not all the tunnels are old sewers however, and there is an old Post Office Tunnel, some ‘secret’ tunnels for military purposes and even some old bank vaults and old private tunnels.
It really is fascinating to see the old brick and stone work and recognize the various periods of construction as pointed out by Matt. It is quite staggering how much the City has changed since the first white settlers landed here and it is equally impressive to see all the hand-formed stone-masonry which is as good as it was 300 years ago!
Tunnel Tours are not only of interest to history buffs and tourists though. They are a great place for business to hold corporate team-building and motivational events.
There are too many tunnels and things to see in one day and we will very definitely be going back for further explorations… it really is that interesting!
Tunnels Tours are the hot new must-do adventure in Cape Town but numbers are limited so anyone interested really does need to book in good time.
For prices and all other information contact Matt Weisse on 0824824006, email him at mattweisse@mweb.co.za or visit goodhopeadventures.com